I am very happy to post the following announcement of two Ph.D. fellowships on behalf of my colleague, and work-space neighbour, Magnús M. Halldórsson. I trust that it will be of interest to some of the readers of this blog and/or their students. The project "Design of Ad-Hoc Wireless Networks", which has Magnus as PI and sees the participation of ICE-TCS members Pradipta Mitra, Eyjólfur Ásgeirsson, Henning Úlfarsson and Ymir Vigfusson, has just been awarded a three-year excellence grant  by The Icelandic Research Fund.


Applications are invited for two Ph.D. fellowships at the School of Computer Science (SCS), Reykjavik University. The positions are part of a three-year research project funded by a grant-of-excellence by the Icelandic Research Fund, under the direction of Magnús M. Halldórsson.

Aim of the project

The aim of this project is to elucidate fundamental properties of wireless networks, broadly construed. Our focus is on general provable properties that hold for arbitrary configurations and are independent of situation-specific characteristics. We explore realistic models of interference, with the aim of bridging some of the gap between theoretical and applied research. We will also investigate practical protocols to disseminate information in general networks.

Some of the aspects of the projects include:

· Analysis of increasingly realistic models of wireless communication, including shadowing and obstacles, mobility, and network coding.

· Installation of a comprehensive wireless testbed, and the implementation of empirical confirmation studies.

· Resolution of fundamental open questions on wireless scheduling and capacity, and the design of communication primitives.

· Creating and evaluating protocols for information dissemination in combined wired and wireless networks.

The mode of operation of the project is three-pronged:

· Conducting empirical studies in a wireless testbed, along with simulations studies.

The research group consists of faculty members from three schools at Reykjavik University and collaborators at TU Aachen and ETH Zurich. The group includes Ýmir Vigfússon, Henning Úlfarsson and Pradipta Mitra (SCS), Eyjólfur Ásgeirsson (School of Science and Engineering) and Sverrir Ólafsson (School of Business and School of Science and Engineering). The project director is Magnús M. Halldórsson (SCS). Our primary collaborators are Berthold Vöcking (TU Aachen) and Roger Wattenhofer (ETH Zurich); we also collaborate with other world-class researchers in Europe, N-America, and Asia. The research group website is http://alnet.ru.is/sinr.html.


The successful candidates will benefit from, and contribute to, the research environment at the Icelandic Centre of Excellence in Theoretical Computer Science (ICE-TCS). ICE-TCS has currently 14 permanent members, five postdoctoral researchers and three Ph.D. students. For more information about ICE-TCS, its members and its activities, see http://www.icetcs.ru.is/.

Applicants for the Ph.D. fellowships should have a MSc degree in Computer Science, or closely related fields, and have a solid background in the analysis of algorithms and a good understanding of networking. One of the studentships is expected to be systems-oriented, for which an experience with systems design and implementation is essential. The other will be focused on algorithmic analysis, for which mathematical competence is crucial.

By Friday, 15 February 2012, interested applicants should send their CV, including a list of publications where applicable, as a PDF document to mmh@ru.is, together with a transcript of their academic record, a 1-2 page statement outlining their suitability for the project and the names of two referees who can comment on the research potential of the candidate.

About the School of Computer Science at Reykjavik University

The School of Computer Science at Reykjavik University has ties with several leading foreign universities, facilitating collaboration, as well as faculty and student exchanges. In particular, the School has a joint M.Sc. degree in Computer Science with the University of Camerino, Italy, and joint Ph.D. degree programs with KTH, Stockholm, Sweden, and Eindhoven University of Technology, Holland.

Information about Ph.D. studies at the School of Computer Science is available at
http://en.ru.is/departments/school-of-computer-science/ph.d-studies/

[1] Up-to-date Exchange Rate can be obtained from http://sedlabanki.is/?PageID=183
Posted by Luca Aceto at 6:44 pm No comments:

From xkcd. My daughter would not be very happy with this Zeno behaviour :-) 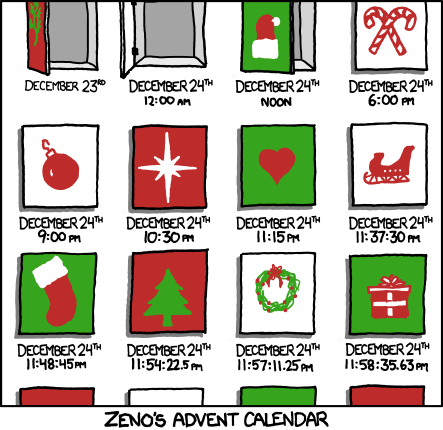 Posted by Luca Aceto at 3:17 pm No comments:

The list of accepted papers for FOSSACS 2012 is now available. The competition for the available slots was very hard, and several deserving submissions could not be selected for the conference.

On a personal note, the more I serve on PCs for competitive conferences, the more I have the feeling that the quality of the competition is increasing. The same holds true for grant applications, job applications, promotions and just about any other aspect of academic life.
Posted by Luca Aceto at 10:11 pm No comments: