Happy Easter news for the TCS community. Samson Abramsky is being awarded the British Computer Society (BCS) Lovelace Medal for 2013. (The press release is here.) The BCS Lovelace Medal was established in 1998 in honour of Lady Augusta Ada Byron, Countess of Lovelace and daughter of Lord Byron. The Medal is presented annually to individuals who, in the opinion of BCS, have made a significant contribution to the advancement of Information Systems.


It is particularly pleasing that this award recognizes work of a highly foundational character, and shows the commitment of BCS to support the study of computing not only for its manifold applications, but as a fundamental scientific discipline in its own right.

As the press release states, Samson


is pre-eminent in setting the modern agenda in the foundations of computer science, an area where he has made immense contributions since the 1980s. His contributions in each of the past three decades had a major impact on the field, notably: Domain Theory in Logical Form, Game Semantics and Categorical Quantum Mechanics. He has shown the ability to change research fields and to establish new interdisciplinary approaches.  His work over the past decade has shown that methods and concepts developed in theoretical computer science can be applied very directly in quantum information, and the foundations of quantum mechanics itself.

Another recent example of application of methods from "volume B TCS" to other fields is in this short paper, where Samson and Wiktor Winschel apply coalgebraic and other structural methods originating from computer science to economics and game theory.

Congratulations to Samson!
Posted by Luca Aceto at 11:24 am No comments:

Does it also work in theory? 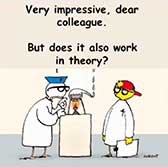 How to write an unsuccessful letter of nomination for an award

The following piece of text has been going through my head since the meeting of an award committee I attended earlier this week. I had to get rid of it by writing it down. So here it is, for your reading pleasure. I thought that it was best to choose a "How to have your abstract rejected" style for this piece.

The first step in ensuring lack of success of a nomination is not to read the guidelines in the call for nominations. This will make it highly likely that your letter will not address at least some of the criteria that a good nomination should have. However, this leaves open the possibility that, by chance, your letter of nomination address some of the most important criteria for nominating your candidate. The best approach to prevent this from happening is to be systematic. Do read the call for nominations and make sure that you avoid addressing each of the criteria listed there. For example, if the call asks for (a link to) a CV, do not provide any!

However, the systematic approach requires precious time, effort and organization. Isn't there a better way to achieve your goal of submitting an unsuccessful nomination without sweating too much? Indeed there is! The perfect, no-sweat unsuccessful letter of nomination is a one liner that reads:


I nominate X for award Y. Best regards, Z
Submitting this letter template, which you should feel free to reuse, will strongly indicate to the award committee that is in charge of evaluating the nominations and of selecting the award recipient(s)
Is there a better way of achieving your goal? If so, I should really like to know.
Posted by Luca Aceto at 3:13 pm 2 comments:

I am enjoying reading Out of Their Minds (The Lives and Discoveries of 15 Great Computer Scientists) by Dennis Shasha and Cathy Lazere. IMHO, the book does a great job in making the lives and ideas of some of the leaders in our field accessible to a general public. I will recommend it to my students and to the colleagues of mine who will prepare future Pearls of Computation seminars.

At the end of the chapter devoted to Donald E. Knuth,  the authors quote Don Knuth as saying:


I do one thing at a time. This is what computer scientists call batch processing---the alternative is swapping in and out. I do not swap in and out.

This quote reminded me a TED talk, in which Italian designer Paolo Cardini encourages his audience to consider the virtues of monotasking.


For several years in my career, I was largely a monotasking person. In my research, I mostly worked on one thing at the time. However, this has changed substantially over the years.  Now I find myself multitasking and context switching a lot and this leads to more stress at work. I guess that most of us have a similar story to tell; the length of the list of things to do increases much faster than our ability to get things done, alas.
Posted by Luca Aceto at 5:24 pm No comments: